The history of Bethel Church begins in the 18th century when Missouri was still a part of the Spanish controlled, Louisiana Territory. The Spanish General had ordered his commandants that “no religion except Catholic would be allowed in the province”. So, as Baptist settlers made their way into the territory in the 1790’s, they were forced to practice their religious faith in secret meeting places – usually their homes. Preachers had to travel under the cover of night in an effort to avoid prosecution. Stories indicate that some even swam across the Mississippi River after dark to avoid being detected & arrested. Life for these early settlers was very difficult in many ways. But, as history shows us, thru a strong faith and determination, they persevered. 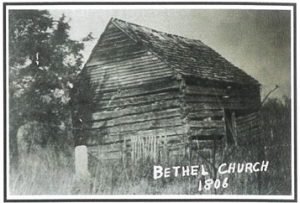 In 1803, with the purchase of the Louisiana Territory, the “climate” changed and Protestants could meet openly. in 1805, David Greene, a Baptist preacher from Kentucky, came to the area and ministered to the settlers in our area. Then in 1806, he organized a new church south of, present day, Jackson. Bethel Baptist Church was constituted on July 19, 1806 with 15 charter members. Among those charter members was Thomas Bull, who received a land grant from the Spanish after he arrived in the territory in the 1790’s. In October, of that year, they voted to build a “meeting house” on Thomas Bull’s land.

Following the earthquake of 1811, the church saw an incredible revival and a large influx of new members. They soon outgrew the little building. Church minutes show that in September,1812 they voted to build a larger meeting house. According to the church record, a 24′ by 30′, made of hewn logs, with a stone fireplace at one end. The new church building was completed sometime before April, 1814.
The new Missouri territory was divided into five regions, the Cape Girardeau district being one of them. From the very beginning of their new-found “freedom of religion”, the Baptist settlers traveled great distances to minister to other people in the district. As early as November, 1807, members of Bethel had established an arm in the St. Genevieve area. This church was known as Barren and later Boise Brule. By 1824, nine “arms” of Bethel Baptist Church had been organized and established throughout the Cape Girardeau District.

The last of these churches (arms) organized was the First Baptist Church of Jackson, Missouri. First Baptist church, Jackson, organized in April, 1824, remains in existence today. One of the larger churches in Jackson, it stands as a tribute to the missionary spirit of those early Baptist pioneers.

In December of 1811 the earth moved – literally -and a great spiritual revival followed what became known as the New Madrid earthquake. Wilson Thompson, pastor of Bethel Church for two years, credited God for the earthquake to get the church back to “prayer and short exhortation”. There was a large influx of new members. In 1812, at least 87 people joined the church. In 1813, as a result of this revival – and the continual moving of the earth – Bethel Church grew to its largest numbers with 143 members and 43 other members at its three “arms”.

Besides establishing new churches and sharing in local evangelism, Bethel extended its missionary outreach beyond the local church. In 1816 Bethel saw the need for a local Missouri association of churches. Consequently, seven churches gathered at the Bethel meeting house to form the Bethel Baptist Association, the first Baptist association in the state of Missouri. In June 1824 the new Cape Girardeau Association, which was pro­ missionary, was formed by ten Baptist churches and Bethel Church then joined the Cape association.

White and black members worshipped together at Old Bethel. They were equally admitted by baptism or letter, dismissed by letter, and equally called before the church for an accounting of some wrong doing.

Even as the church was growing, it gave great attention to strict discipline among its members. Errant members were called before the church to give an accounting and if they were found guilty and did not repent, the wayward members would be excluded from membership. A vote of three-fourths of the church members was needed for excommunication. Also, in 1820 the church decided that it was wrong for parents professing Christianity to allow their children to go to “Balls and Frolics”.

The poplar log building of Old Bethel served not only as a meeting place for worshippers, but also served the wider interests of the community. Cape Girardeau District had no “courthouse,” so in 1814 the Bethel congregation voted to allow the court to use their building. Thus, the first court sessions held in the district were conducted in Bethel Baptist Church. This arrangement continued until in early 1815, when the members of Bethel decided that they should be separate from the legal decisions handed down by the court (an early example of the need for a separation of church and state). Bethel Church also served as a school building in 1838.

By this time, members of Bethel had become very involved in the organization of the town of Jackson, as well as, the development of Cape Girardeau County. Several members served in government positions and some were among the first merchants in Jackson. Among those were Isaac Shepphard, judge of the common pleas court and the county court; Thomas English, a trustee for town of Jackson; John Shepphard, appointed as a commissioner by the Missouri General Assembly to establish a new seat of justice in Cape Girardeau County. John Juden, Jr., one of the first merchants in Jackson and a charter member of First Baptist Church, became the first Justice. Direct descendants of Bethel Baptist Church members still reside in the Jackson-Cape Girardeau area and continue to be involved in government and civic organizations.

After the “arms ” of Bethel Church began to grow, original members of Bethel began attending one of these churches that was closer to their home. The community of Jackson was growing and it was more convenient to attend the church in town instead of traveling a mile or more to the little log church. By 1842 the anti-missionary spirit was so great that the church voted not to allow members to fellowship or commune with “missionaries or with anyone that would”. After this, several members of Bethel were excluded for joining missionary societies. The anti-missionary sentiment being practiced by the preachers at Bethel in the mid 1800’s, led to the closing of the doors at Bethel Baptist Church.

In the waning days of Bethel Baptist Church, the Civil War seemed to serve as the final “unsettling event”. No church records were kept between August of 1862 and October of 1865 indicating that the church was not able to meet to conduct business. Earlier the church had registered its “irritation” with the war and had even excluded a member for joining the army.

The final meeting of the church was recorded in August 1867. The approaching demise had been evident. The once prominent missionary Baptist church had closed its doors.
The old church stood at its original site among the tombstones until sometime in the late 1800’s a German farmer moved the church building, log by log, to a farm about 1.4 miles west. Old Bethel was gone but not forgotten. The site lay silent until 1906, when a monument was erected to commemorate the 100th anniversary of Bethel Baptist Church. The spirit of Bethel lived on. For years to follow, the subject of restoring the site and cemetery surfaced but with very little activity. 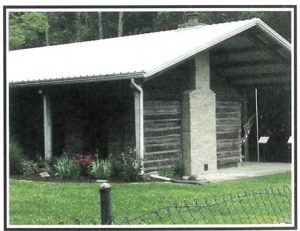 In 2000, a developer purchased a farm about 1.4 miles from the Bethel cemetery and church site. Inside a large barn on the property, he discovered a log structure, the remains of Bethel Baptist Church. Dr. Frank Nichols, a professor and historian with SEMO University in Cape Girardeau, Missouri, was contacted and authenticated the 200-year-old logs. They were then determined to be the logs from Bethel.

Arrangements for purchase of the logs was done by Dr. John Marshall of Springfield, Missouri, Mrs. Marshall being a direct descendant of John F. Hitt (charter member of Bethel).

The logs were purchased by the Second Baptist Church of Springfield and then given to the Missouri Baptist Convention. Preparations were begun to move the logs back to the original site and restore Bethel Baptist Church.

Much care went into the restoration process to assure that the old church (now known as Old Bethel Baptist Church) was as authentic as possible. Nails and panes of glass that were 200 years old were used in the plank floor and construction of the windows. The pegs used to reassemble the logs were carved by a local craftsman. Ken Moxey volunteered his time to carve more than 1000 pegs. The original church minutes were used to provide information about the building. There are two identical sets of the original church minutes; one in the possession of the Terry Begley family (a direct descendent of the John Shepphard family) and the other in the possession of the Cape County Archives. The description of Bethel Church written by a visitor in 1825, Judge W. C. Ranney, when he attended there, was also used for details. 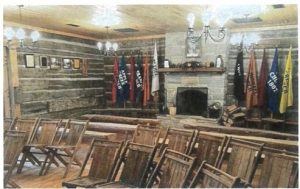 A large number of volunteers from various religious denominations in the Jackson area, as well as Baptists from as far away as Springfield, Missouri, worked countless hours to restore the historic old church. Melvin Gately, of Cape Girardeau and a member of the Missouri Baptist Historical Commission, served as the project coordinator. The Missouri Baptist Historical Commission was instrumental in successfully raising the funds needed to bring the beloved historic church building back to life.

Restoration of Bethel Baptist Church was completed and dedicated in 2007, a long awaited and anticipated event. Bethel Baptist Church, the first non-Catholic Church west of the Mississippi River, stands today as a tribute to the strength, perseverance, and faithfulness of those early Baptist pioneers.

Many settlers came to know God and experience His love and saving grace through the ministry of those faithful few. Although the church’s ministry lasted less than 100 years, it marked the beginning of Baptist, as well as the free church, work in Missouri.